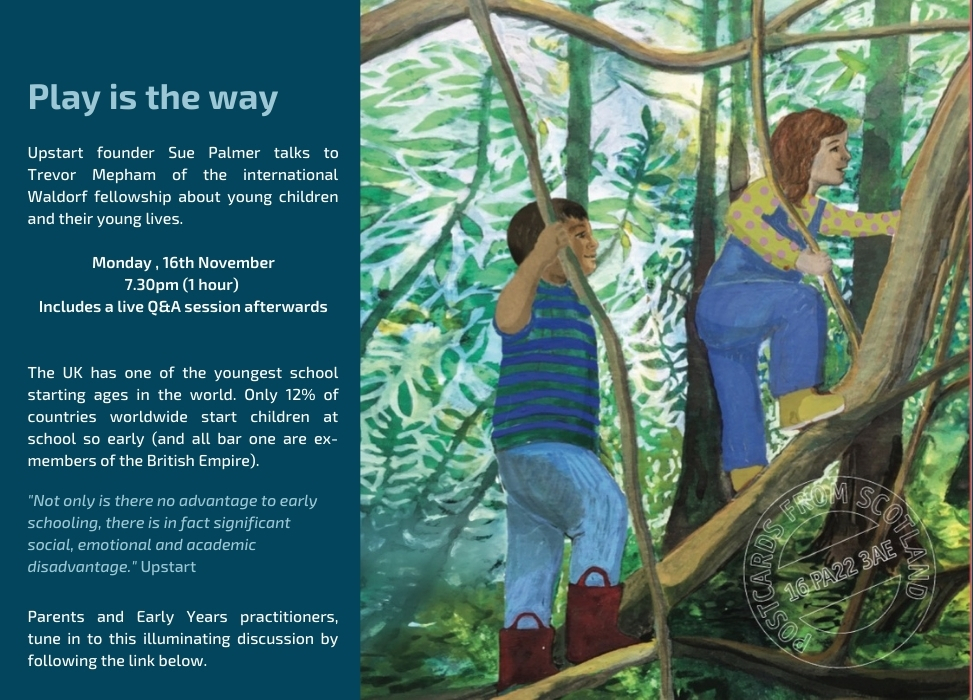 In our latest interview on ESS Talks, we speak with Sue Palmer, author of over 250 books, including Toxic Childhood; and founder of Upstart Scotland.

Sue trained in primary education at Moray House, then taught in Edinburgh and the Borders. For the last thirty-five years Sue has been an independent writer, presenter and literacy specialist but, since researching Foundations of Literacy (2004) and Toxic Childhood (2006), her work has mainly focused on early childhood education and play. She was a founder member of the UK Save Childhood Movement, Chair of the Scottish Play Commission and a member of the Scottish Government’s Early Years Task Force.

The Upstart campaign is challenging Scotland’s school-starting age. Advocating a Kindergarten setting in Scotland for all children under 7-years-old, Upstart’s website links to a volume of evidence in support of their vision from neuroscientists to child development specialists. In June 2015, these strands of evidence were brought together in a book – Upstart: the case for raising the school starting age and providing what the under-sevens really need (written by Palmer, published by Floris Books). It outlines that not only is there no advantage to early schooling, there is in fact significant social, emotional and academic disadvantage.

Sadly, the UK – which includes Scotland – is obsessed with ‘measurement and accountability’. Central government ‘s  craving for statistical evidence of progress infects local government with the same craving. Local authorities then pass on the paranoia to schools, where senior managers pass it on to teachers, and teachers pass it on to the children and young people in their classes. And, perhaps most sadly of all, it is also communicated to the parents of tiny children, who come to believe that the sooner their offspring climb on to the data-based treadmill, the more ‘successful’ they will be.

Once national standardised assessment is established, it becomes the driving force behind education – and, in the end, schools become little more than ‘exam factories‘.

Described in The Scotsman as one of the country’s ‘new radical thinkers’, her most recent project as editor of Play Is The Way is a collection of highly regarded Early Years ‘voices’ from practitioners to academics, looking at every aspect of play and what it can bring for our earliest learners. Published this month, it is Sue’s baby.

In this online talk, Sue talks to Trevor Mepham, Principal at the Steiner Waldorf academy in England – the first publicly funded Steiner-Waldorf school in the UK. Hosted by Edinburgh Steiner School, this is a talk without a kilt on, discussing the importance of a play-based, relationship-centred education for all young minds, not just those living in Scotland’s capital. 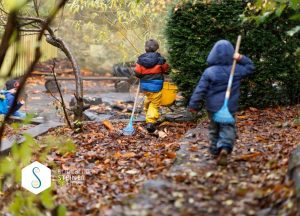 Uniquely, Edinburgh Steiner School has long run a curriculum that has embraced a delayed start to formal learning. Children here start their school career aged 6 or 7, in line with 1,200 Steiner Waldorf schools worldwide. Before then, they learn in an environment that is simple and unhurried without the notions of ‘achievement’, ‘success’, or ‘failure’. Specialist teachers follow the internationally-recognized principles of the Steiner Waldorf curriculum, where education in the first six years is integrated. Learn about our Early Years provision.

Alongside Edinburgh Steiner School, Upstart is also an official supporter of the Give Them Time campaign, which is at a critical point this month as there are two CoSLA meetings in the next few weeks which they hope will decide whether the imminent law change will become effective immediately or phased in.

Broadcast on 16th November, 2020, the talk can be revisited by following the link below.