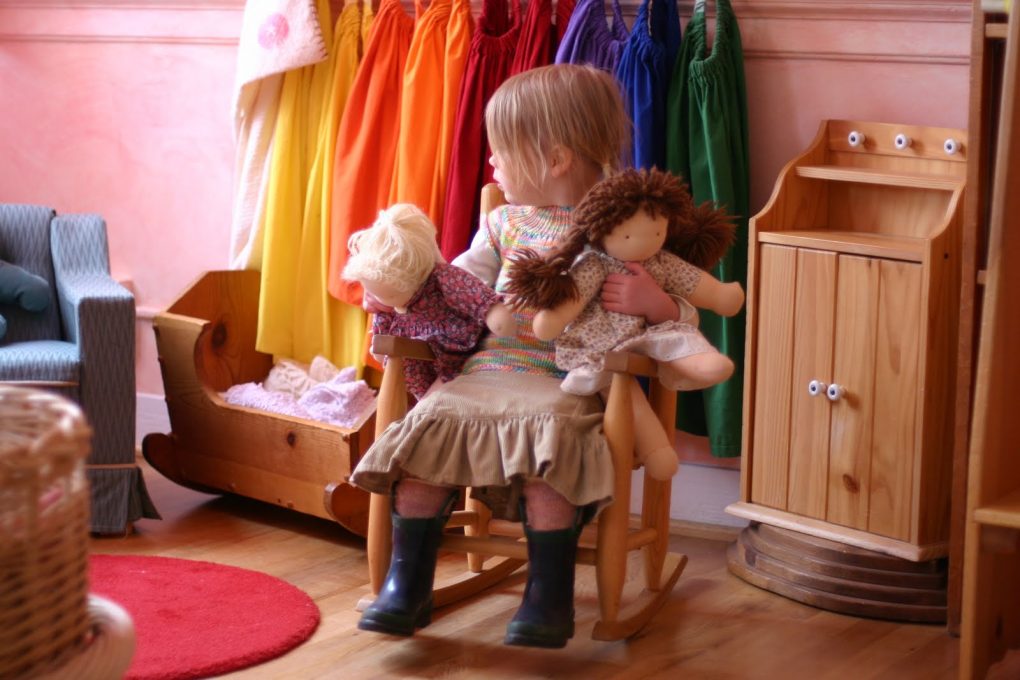 In the 100th year of Steiner Waldorf education globally, London’s V&A Museum of Childhood  (the largest institution of its kind in the world) has acquired two new acquisitions for its major redevelopment: a female and male Waldorf doll from Edinburgh Steiner School Trust. They will join an internationally significant collection of dolls.
To mark the 150th anniversary of the museum’s historic building in 2022, V&A has embarked on a flagship project to reinvent the much-loved Museum of Childhood. As the most ambitious project in its history, this years-long curation will establish it as a world-leading museum of design and creativity, showcasing nationally significant anthologies of childhood for generations to come.
Handmade, the dolls’ natural fibres and intentionally simple facial features allow children to process their lives and realities through roll play and imitation. The distinctive dolls are so compatible with Waldorf Steiner Early Years education philosophies, they share the ‘Waldorf’ tag. As a purposeful, passive plaything, they employ imagination, encourage meaningful play and develop the young lateral thinker. Through these activities a child grows physically, intellectually, and emotionally.
There are now 2,000 Kindergartens on every habitable continent. Edinburgh Steiner’s Early Years provision includes a Baby Group, six Parent & Child groups, a Playgroup for children aged 2 and above to attend without their parent / carer and three Kindergartens for children aged 3.5  – 6 years old.

The two V&A Museum acquisitions were made by a Steiner handwork teacher for a wee red-headed, blue-eyed lassie in the playgroup. The auburn hair is a characteristic less than 2% of the world’s population have (13% in Scotland, theorized by scientist as having something to do with the dreich Scottish weather). Natural ‘gingers’ with blue eyes form the rarest combination on earth. The fact that each doll is hand-made, means it can be tailored in every detail, no matter how subtle.

“Play for young children is not recreation activity…It is not leisure-time activity nor escape activity…Play is thinking time for young children. It is language time. Problem-solving time. It is memory time, planning time, investigating time. It is organisation-of-ideas time, when the young child uses his mind and body and his social skills and all his powers in response to the stimuli he has met”.  (James L. Hymes Jr, Child Development Specialist and author of ‘The Child Under Six’).

The Steiner pedagogy attaches great importance to the role of self-directed play in healthy child-development; supporting the child in their imaginative endeavours through the provision of simple, unformed, natural materials that nurture their senses and maximize imaginative potential; believing that the free flow of imagination in childhood forms the foundation for creative lateral  thinking in later life. The early years approach is rooted in the principle: young children learn through imitation.

Waldorf dolls are commonplace in the pastoral environment of a Steiner Kindergarten; are employed by both sexes within the co-educational setting; played with by children right through the Kindergarten years. They are important playthings, allowing children to process their lives and realities through play.

Using traditional European doll-making techniques, they are handmade with natural fibers (cotton, wool), from their stuffing to their hair to their clothing, making them comforting to hold and touch. Educational philosopher, Rudolf Steiner, who founded the first Waldorf Steiner school in 1919, wrote about the importance of sensory experience in early childhood. The wool stuffing in the doll, made individually, by hand, by a person who is typically a doll maker, absorbs the child’s warmth.

The facial features are left intentionally simple in order to allow the child playing with it to develop the imagination and creative play. It has either no features, or a simple neutral expression; a small suggestion of nose; skin, eye and mouth colours varying with each doll, reflecting the diversity of nationalities within the group; the legs and arms are soft and if flexible allow natural postures.

This is so the child can engage in meaningful play. The young mind can imagine the personality and mood of the doll and if the doll is awake or asleep, helping a child to project and process their own feelings during roll play. They can envision the doll as happy or sad, frustrated or afraid. Its tactile body imitates the warmness of human contact. A plastic doll with a fixed smile and expression, rigid limbs and relative cold touch can make it harder for a child to identify with and pretend the doll is crying, surprised or giggling.

Their prominence in the Early Years within the child-friendly Kindergarten as a purposeful plaything emphasises young children are profoundly affected by their environment. Since young children learn by imitation,  roll play is considered important ‘work’ of the young child. Passive toys such as the doll, encourage a child to be actively engaged with learning.  Through these activities a child grows physically, intellectually, and emotionally.

The distinctive doll is so compatible with Waldorf Steiner education philosophies, it shares the Waldorf tag. The name Waldorf comes from the cigarette factory which hosted the first school for the children of workers. Managing director of Waldorf-Astoria, Emil Molt, asked Dr Rudolf Steiner to be the school’s pedagogical consultant. Political interference from the Nazi regime limited and ultimately closed most Waldorf schools in Europe in the late 1930s. The affected schools, including the original school, were reopened after the Second World War.

The priority of the Steiner ethos is to provide an unhurried and creative learning environment where children can find the joy in learning and experience the richness of childhood rather than early specialisation or academic hot-housing. As part of the Waldorf 100 celebrations, in November 2019 Janni Nicol of Steiner Waldorf Schools Fellowship, held a workshop at V&A entitled In the footsteps of pioneers.  It explored the key principles underpinning the three approaches which have significantly influenced our understanding of play and learning of babies, young children and adults today: Steiner, Montessori and  Froebel. Read more here.

With the increasing awareness of the plastic threat to human health and the devastating affects of the single-use culture, Waldorf dolls are as relevant today as they were when they were first made a century ago.

Still the fastest growing independent educational movement globally, Steiner Schools and Kindergartens in some 80 countries celebrated the centenary of the first school founded in 1919 by Rudolf Steiner for the children of the Waldorf Astoria cigorette factory on 19th September, 2020.

The new addition of a male and female Waldorf doll to the UK’s largest collection of dolls at V&A Museum of Childhood in London is a beautiful marking of this milestone. When giving the School the Deed of Gift in receipt of the donation of the two Waldorf dolls, V&A curator, William Newton typed:

I am writing to thank you for the Edinburgh Steiner School Trust’s recent gift of two dolls to the V&A Museum of Childhood. They have now been formally accessioned and given the museum numbers B.17 & 18-2019, they will be catalogued and made available online in due course.

These dolls were a very timely gift as we have been looking to improve our collection in the province of educational philosophies. They are the first Waldorf Steiner objects to enter the museum’s collection, and we are pleased to be able to now represent the movement with such wonderfully provenanced items.”

The transformational collections will be open to the public in 2022.

To find out more about our Early Years setting, follow the link here. 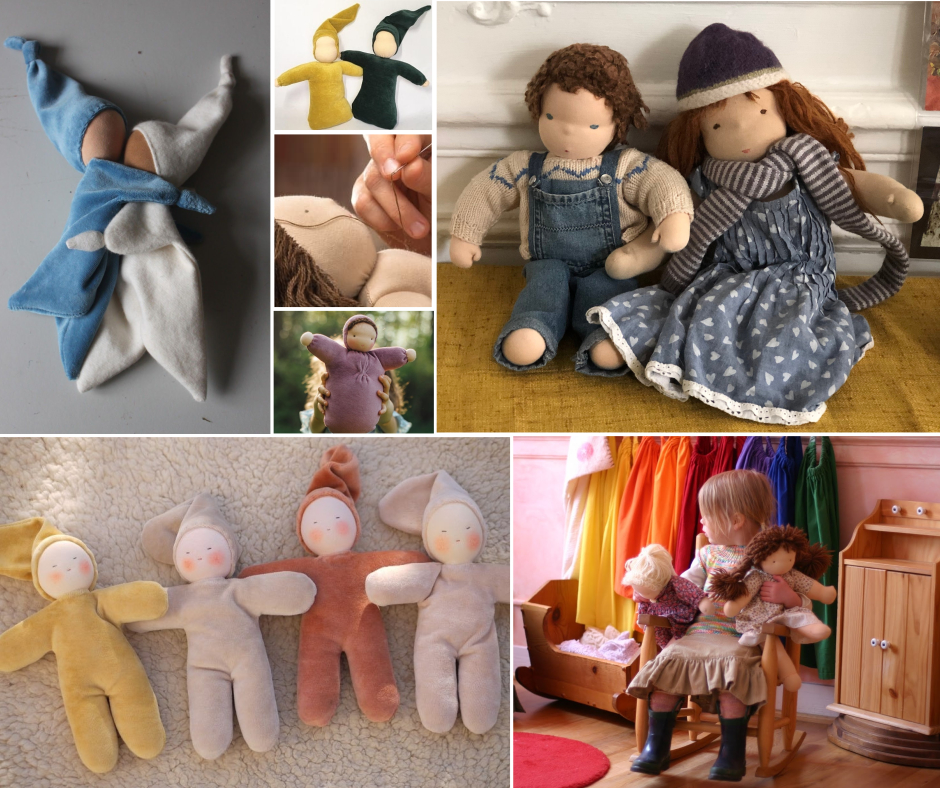