We are deeply saddened by the sudden passing of former teacher Peter Snow on Wednesday 18th December, who only that day had made contact with the School.

Peter taught Drama and English at Edinburgh Steiner School (formerly Rudolf Steiner School of Edinburgh) for 28 years, from 1983 up until 2012, using storytelling as an integral part of the pedagogy.

During his career he also wrote and directed many plays of his own, some of which were performed by senior pupils, as well as large-scale productions such as Oliver! He was also a regular actor in the Steiner Waldorf Oberufer trilogy of plays

His plays added to the volume of literature, poetry, storytelling, articles, broadcasting and blog he authored and translated during his lifetime.

Peter’s wife Malisa has posted the following information on social media: “A memorial service for Peter Snow will take place on Friday, December 27th at 1:00 at the Unitarian Universalist Church (152 Pearl Street, Burlington, VT)… We are planning to hold another memorial in the UK at a later date.
Recognising the huge contribution Peter made to the school over almost three decades of his life, and his particular appreciation for the Three Kings’ story, Edinburgh Steiner School will be holding a memorial for Peter on the last of the holy nights (Epiphany), sometimes called the Three Kings’ Day – marking the visit to the baby Jesus by the three Kings, or Wise Men: Celebrating the life of Peter Snow.

Our thoughts go out to his family.

School photograph above taken in 2001. For those who would like to read some of Peter’s poetry or listen to him tell a story, you can go to: Petersnowstories.com

“My life has been blessed with some very good friends. So it is with great sadness that I’ve learnt of the unexpected and sudden death of one of my best friends Peter Snow” posts former colleague Michael Williams, continuing: “I’ve know Peter for more than 30 years. He was a teaching colleague of mine at the Edinburgh Rudolf Steiner School where we both taught English Literature. Peter also taught Drama and was instrumental in writing and directing plays at the school…I am grateful to have called you my friend.” Listen to Dr Michael Williams interviewing Peter Snow in The Teller and The Tale featuring Peter Snow.

“Peter was one of the tutors on the Steiner Teaching Training course (in 2003?). He was a wonderful and inspirational tutor. He will be missed.” Kate Christmas

“My heartfelt condolences to Malisa, Christopher & Sophie. I was so saddened to hear this news and I am thinking of you all at this time. I have known Peter for over 40 years as a Colleague at the Edinburgh Steiner School and, particularly, as a Friend. Rest in Peace, Peter.” Gordon Reynolds

“So sad to hear this. He taught me many moons ago. Deepest condolences to his family” Susan Briggs

“So saddened to hear this; he did wonders for our son James – going above and beyond to get him into college, rest in peace xx” Alison Kate

“He gave me a report card that always stayed with me and reminded of who I could be and am “ it’s so very notable that one burdened with such shyness can have such a stage presence” Thank you Mr Snow, I learnt to keep the stage presence (1990-1996).” Annie Cooper

“Very sad to hear this. Proud to have been in his class. Anyone who can teach and guide a bunch of teenagers is amazing but he was one of the best. R.I.P” Lucy Barclay

“Peter was an extraordinary soul, I remember him directing a mammoth initiative to direct and produce all three of the Mystery plays encouraged by Rudolf Steiner for the Christmas season. We performed them all consecutively on a bitterly cold Christmas in St Steven’s Church in Stockbridge. I took the part of Herod and the powerful impact was felt by me for months afterward. Peter was so generous, warm and encouraging of everyone involved in these community ventures. Sad to hear of his passing and remember him with fondness.” Nigelo Chippzta

“I’ve been thinking about Peter since I read of his passing. Fond memories of Peter reading P G Wodehouse in english lessons, acting out all the accents and moods for us. He was warm and witty and interested in each and every one of us. I loved bumping into him in full kilt outfit near the story telling center on my holidays back in Edinburgh, but always thought we had more time to catch up … sadly not, a lesson to be learned hear … don’t plan to catch up some other time … now is the moment ❤ He was a huge part of my transition from child to adult being our class guardian for the upper school (1985-88).” Ellen Stevenson

“This is a sad loss. I can say for sure that Peter changed my life course for the better.” Jon Salton

“I am truly grateful that Peter was, is and always will be.” Erika Taylor

“A great teacher and a very kind man.” Ben Norton

“You taught me so much and helped develop me into a better, more confident person. Without you I’d still be a nervous wreck. RIP Mr. Snow, thank you for everything.” James Innes Cameron

“So sad to hear of mr snows passing I can only honestly say that I felt that he was one of very few teachers who I felt took me seriously a well as inspired me in my school years and beyond iam glad I told him this on my last day at school in class 12 back in 1997 you will never be forgotten thanks again.” Oliver Pilley

“After my time. This school changed my life, I would not, have had the happy times at another school. Still keep in touch with a few former class mates. Still have my reports. R. I. P Mr Snow.” Helen Paterson

“I have had the privilege of having been taught by two Peter Snow in my lifetime. Peter Frederick Snow, Painter and Stage Designer (1927-2008) was Head of Theatre Design while I was studying Theatre Design at the Slade School of Fine Art and more recently Peter Snow, Course Tutor (2016) in my first year of the Teaching Education Course here at the Edinburgh Steiner School. Both Peter’s were unique and inimitable, both in dress and passion for their subject. Peter Snow, the Stage Designer would arrive by Harley Davidson, to deliver his class resplendent in black leather trousers, black biker boots and tasselled leather jacket and recount tales of designing Samuel Beckett’s Waiting for Godot for Sir Peter Hall.  Peter Snow, the Story Teller and ESS Teacher Education Course Tutor would arrive to deliver class on Saturday to an eagerly awaiting group of students more modestly by foot, often resplendent wearing colourful tartan plaid and a tweed cap.  Both Peters in my experience shared a common passion; storytelling, in its many forms, language and the spoken word, the art and craft of the storyteller, the shared experience with an intimate audience or communicated in the form theatrical stage production.

A most memorable lesson given by Peter while I attended the ESS Teacher Education Course was his retelling of the story of Parsifal.  As with all great teachers, Peter had the unique ability to create a learning environment, which was inspiring and encouraging, his ability to weave and journey through this epic tale was truly inspiring.   In our last term with Peter as our tutor, Peter was making final preparations to begin a new chapter in his life to move to the States to be with his family.  During Advent, Peter shared a most moving story, The Lamplighter, one written not by his himself, but one, which had been written by his daughter Sophie Snow.  Peter gave voice to this story and it was beautiful. Thank you to Peter Snow, both Peter’s for inspiring and encouraging creativity in all forms.” Lorna Marshall  (Graduate – ESS Teacher Education Course) 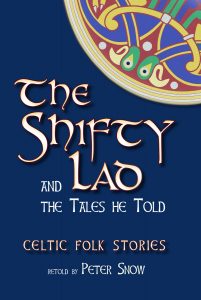